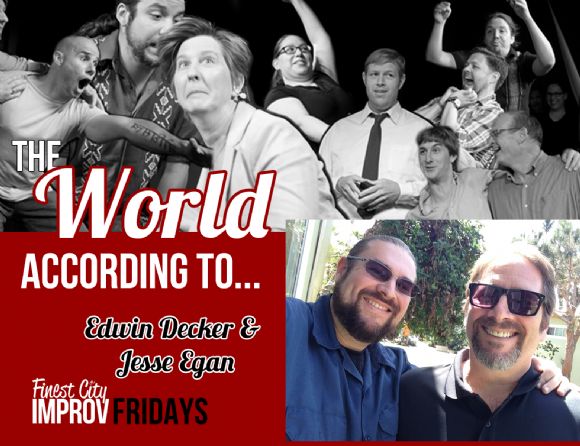 Jesse Egan started doing stand-up comedy after a summer road trip took him from his hometown of Arlington, VA to the west coast. He was named part of the Best of San Diego at The Comedy Store in La Jolla California and in 2014 Jesse won First Place in San Diego’s Funniest Person contest. He has opned for Dane Cook, Doug Stanhope, Chris D’Elia, and many more and has appeared on Union Tribune TV, Fox Rox TV, The Binge radio show on 103.7 FM, and in the stand-up comedy documentary film “Stage Time.” Jesse’s comedic influences range from Dean Martin to Dave Chappelle and his stand-up reflects his personality as an easy going dude that doesn’t take himself too seriously. Check out Jesse’s comedy in clubs and colleges in your area or on his website: JesseEgan.net.

Edwin Decker is a freelance writer and performance artist residing in San Diego. He regularly publishes articles in various newspapers and magazines in San Diego and around the country. His work has appeared in, to name a few, The San Diego Union Tribune, San Diego Reader, Modern Drunkard Magazine, Seattle Stranger, Tucson Weekly, Creative Loafing (in Atlanta), Cleveland Scene and his mothership magazine San Diego CityBeat. His column, Sordid Tales, runs biweekly in CityBeat. Sordid Tales is a satiric look at the world from the perspective of a veteran bartender. It is often irreverent, seedy, controversial and, of course, sordid. His book “Barzilla and Other Psalms” was nominated for a 2007 San Diego Book Award and his performance piece, “Questioning Innocenece is Questionable,” won the San Diego Visual Arts Network multi-genre Performance Slam grand prize. Check his various musings at edwindecker.com.

See The World According To…! every Friday @ 8 p.m. at Finest City Improv! The performance always begins with 30 minutes of improv. See the team Pick & Roll on Friday, April 10.