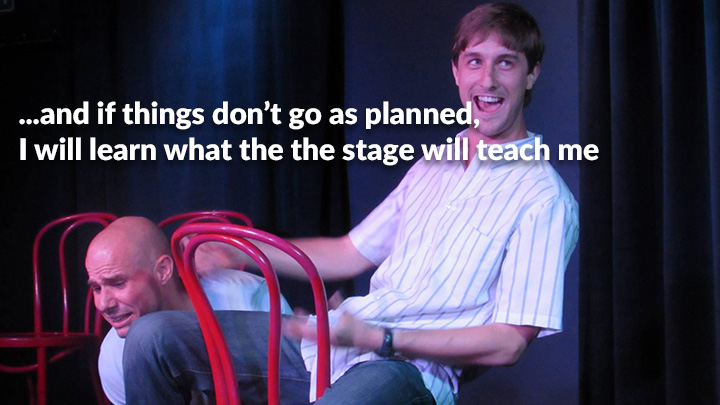 Even after 25 years of stage performance, I still feel like I screw up constantly. Being on a house team at Finest City only helps reinforce the feeling that I’m a fraud and any day now, they will figure me out. Before a recent Bicoastal show, Matt Harris and I looked at each other with only seconds before we took the stage and Matt said, “It never goes away, does it?” “Nope,” I said, as our music called us to our audience.

The fear of failure, the nerves, the doubt and the fact that we will continue to make mistakes will be with us for our entire performance career…and that is okay! A few weeks ago, Matt and I decided to try a TJ and Dave set. Their book, “Improvisation at the Speed of Light” is the hot new topic and we figured we owed it to ourselves to switch up our set a bit. We super slow played our first performance, avoided games, and played everything super real.  It was incredibly nerve wracking, but resulted in an amazingly fun set that pushed us into new territory. It was exciting and fresh and different.  It was successful, but in that achievement, we learned very little.

Error is just as important a condition of life as truth.Carl Jung

Nothing feels better than a show that kills. When the audience laughs, groans, cheers, explodes and rides the roller coaster with the performers, it is simply magic. We may learn through this process, but in the cloud of success we seldom see the areas that need improvement. As Matt and I continued to explore this new form, it was difficult to recreate the magic of our first attempt. Characters followed plot more than we wanted. The timing felt off. The laughs that simply materialized from our first show were not there and it affected us…but we learned something. Instead of isolated celebration, we also analyzed with a desire to grow. We realized that we could have listened better, and slowed down more. We recognized elements of game that we avoided unnecessarily and relationships that were not explored. We saw our show through the eyes of error, but recognized that this is where the learning of improv continues forever.

The fear of error and the nerves that follow will never fully go away, but when I’m back stage, about to go on, I redefine that feeling from “You are a fraud” to “This is the feeling of energy that will carry me through, and if things don’t go as planned, I will learn what the the stage will teach me…Thank You!” By adopting this as a mantra before we take the stage, we can channel our fears and allow them to work for us rather than against.