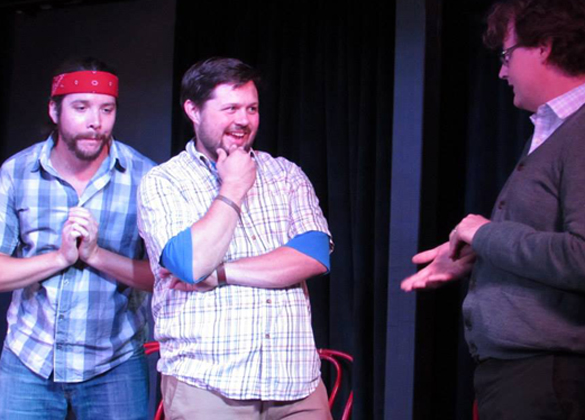 I first started doing improv at the University of Southern Mississippi, where I played with a short form troupe on campus.

Short form is the kind of improv show made popular by television’s “Whose Line Is It Anyway?”.  It’s typically marked by an emcee and games, and often presented like a sports match with teams and points. (Meaningless points, yet very entertaining!)

But there is another kind of improv called long form.

I first saw a long form “Harold” performed by a guest team visiting my college.  It was very different than the “Whose Line…” style I was used to performing and watching.  I noticed the scenes and games in long form connected artfully, and what I saw stuck with me – long after the show had ended.  When I saw my first show in Chicago, I was completely sold – long form was a terrific challenge.  A marathon instead of a sprint.

If short form is like a sports game, then long form is like a play.  It’s still a series of scenes and games, but without the interjections of an emcee or evaluation of points.

Successful long form shows are spontaneous plays with characters and scenes, though often without a strict plot line. It typically goes like this:

These scenes and characters may or may not be seen more than once and they may or may not tell a specific story.  That depends on the form the group plays.

Long Form improv has many different types of forms.  These forms are used by improv groups to give their shows a structure – kind of like a road map.  It tells you where everything is, but doesn’t require you to take a specific route to get there.

For example, in the form “Close Quarters,” the suggestion solicited is a location. All the scenes you see in a show using this form will take place at that location at approximately the same time.

In a “Living Room” form, the suggestion will power a conversation between the improvisers, as though they were talking in their living room. The improvisers then use the talking points generated in the conversation to create their scenes.

In the “Harold”, (the first long form show I saw in college), the suggestion from the audience inspires an opening – a sort of artful, organic group game that is used to unpack all the ideas that will be used to do scenes (e.g. kitchen inspires scenes about family, health, and cleanliness).  The rest of the show heightens and explores those ideas through further games and scenes.

In long form each scene contributes to the overall show.  Each scene can be entertaining individually, but the whole is greater than the sum of its parts.  The various ideas and characters, placed together in order, create what makes the show so unique and, hopefully, more engaging for the audience.

When done well, a good long form show offers something more than a quick laugh.  Maybe it made you think, or surprised you with its complexity and uniqueness -that’s the beauty of long form improv.

For me, another difference between long form and short form shows is the latter can sometimes feel repetitive.  Short form is presented from a roster of similar games, and what makes them funny are the various rules, or gimmicks, of those games.  Because these gimmicks never change, the games can feel similar to each other each time they are played.  They can be a ton of fun, but sometimes we want more.

FCI is the place to be as San Diego’s home of long form improv – nearly every team here does a long form show (but you can still see short form, too!)  Check out these long form shows I play in…

Minor Suspension (playing every other Saturday night) is our musical show, that adds live music and singing into the mix of scenes being improvised.

Director’s Cut (playing every other Saturday) blends and mixes a popular movie in with improvised madness, changing the way you look a that film forever.

I invite you to come by the theater and check them out – everything we do is unrehearsed and unscripted, so no two shows will ever be the same.