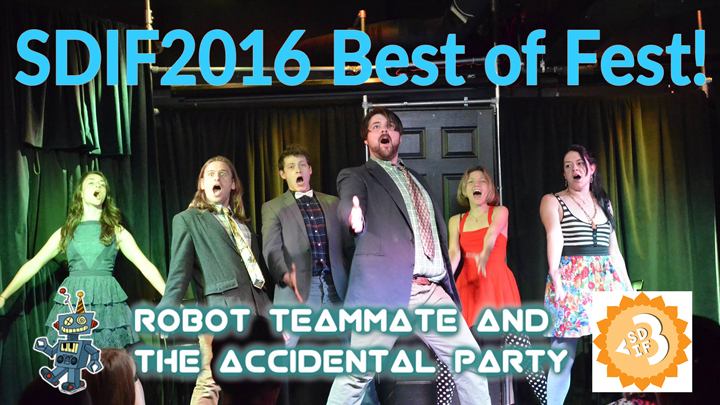 Congrats to Robot Teammate & The Accidental Party, Best of Fest for the 2016 San Diego Improv Festival!

The award is chosen via social media. Teams that submitted to the festival from outside San Diego are eligible.

Robot Teammate’s narrative musical set was inspired by the audience suggestion of “Three Palms in the Desert,” and received a standing ovation Sunday night. In addition to performing, the Robots taught a very highly rated workshop at the 2016 San Diego Improv Festival titled, “How to be a Musical Improv Rock Star.”

“We are so grateful to have been welcomed into the community for San Diego Improv Fest for a second year in a row,” said Robot Teammate’s Kat Primeau. “The audiences are incredible, the festival is organized and run by the kindest people, the caliber of talent is so impressive – and we LOVED teaching some budding musical improvisers! Special shout out to our hosts Camille and Mac and our #1 fan, Brandon Hensgens, for all their love and support.”

This is the latest in a string of audience awards for Robot Teammate. Previously, they’ve won the iO West Cage Match for 86 consecutive weeks, setting the current world record for cage match wins, and received a Del Close Award Nomination for Best New Show. Their original scripted sci-fi musical TIMEHEART premiered to sold out audiences at the Hollywood Fringe 2015, earning multiple nominations including Best Musical and Outstanding Songwriting, and was the top-grossing show of the festival.

The Robot Teammates have captivated audiences since 2012 with their spontaneous musical adventures in venues such as Upright Citizens Brigade, Nerdist, Golden Road Brewing, and on the Geek & Sundry Twitch.tv stream. Currently, the Robots are touring regional comedy festivals, performing for private events, hosting monthly shows at iO West and performing every Friday night at 9pm at Impro Studio Theatre. They also regularly improvise live on Periscope and record original songs and videos for people around the world on Fiverr.com. Activated by audience suggestions, the Robots specialize in completely improvised shows featuring polyphonic music, inventive lyrics, and fantastical narratives materializing faster than you can say 01101011011.

The Robot Teammate ensemble demonstrates a cross-breed of comedy and musical training, hammered out in beta testing during their 300+ shows since inception. The Robots have studied at UCB LA, Second City, iO West, Nerdist, Comedy Sportz, The Clown School, received BFA’s and MFA’s in performance, studied in private vocal lessons, and traveled the world honing their craft. Outside of Robot Teammate, they individually produce musical and non-musical sketch comedy, volunteer with comedy outreach programs, and perform on stage and screen. Visit their website at www.robotteammate.com for more information; you can also find them on Facebook.com/RobotTeammate, Twitter.com/Robotteammte and Instagram.com/accidentalparty

One Comment on “Robot Teammate wins SDIF Best of Fest 2016!”