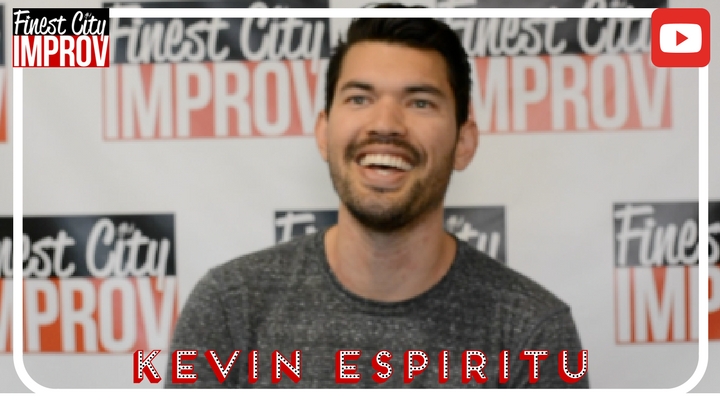 Kevin’s a guy that likes to get his hands dirty– when he’s not on stage, you will find him deep in his garden or solving puzzles for fun. So you know he approaches improv the same way–diving in and using his brain!

He will be graduating in just a few short days from the FCI training center Core program and will likely not be far from the stage after that. You will see him around Friday nights supporting some of his favorite teams and sharing a laugh with his tight knit community.

Kevin has been nothing but an amazing student, great friend, and supporter of his fellow students since we began! Learn more about Kevin by watching his short video here:

My name is Kevin Espiritu and my affiliation to Finest City is as a level six student. I’m how many months in now? I think I’m, what, eight months in, maybe? Yeah, almost exactly eight months in. So that’s me.

Outside of improv you will probably, well, you’ll probably find me rock climbing, gardening or reading a book or just maybe doing a puzzle room. I got into puzzle rooms really recently or just hanging out, just doing whatever.

Play improv is kind of like gardening because it forces you to be present. In gardening your mind can wander, but it’s kind of nice to just be plugged into the earth and messing around with plants and stuff. And the challenge for me with improv is to do the same thing. Just harder to do an improv.

Didn’t really know what to expect going in. I had done some public speaking and then I just really sort of got addicted to it and it became sort of a puzzle to solve, which I guess you can’t really solve. It’s comedy. It just is what it is.

Yeah, the community is awesome. I mean, you get a real sense of who someone is. So everyone’s supportive in their own way, brings their own unique angle and develops the pie of improv knowledge. So you get to be a kid again almost in a therapeutic way, which sort of feels like it sort of heals you for the real world. It feels like you see more opportunity in your day to day life. Yeah.

I would say my improv motto is just seek the present moment. Just seek it as much as you can, but don’t seek too hard because then you’re not in it. So don’t try too hard, but try at least a little bit. That’s my improv motto.