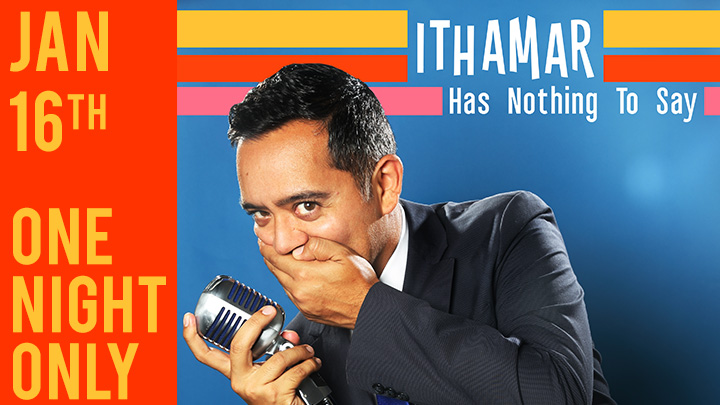 Have you ever met a comedian who thinks talking is so overrated that he prefers to make you laugh in silence? The “Charlie Chaplin of the 21st century” joins Finest City Improv on Saturday January 16th with a one-night-only performance, “Ithamar Has Nothing to Say.”

Engage in an hour of wordless antics with the well-known star, Ithamar Enriquez, who demonstrates that silent improv can be just as audacious, hilarious and awkward as its loud, flashy counterpart.

Typically, we associate silence with being in a library, a church, meditating, swimming under water or passive aggressive fights with our family. On January 16, silence becomes fun. Ithamar has enough talent as an improv performer that he doesn’t need the one thing most improvisers rely on: a voice.

Born and raised in El Paso, Texas, Ithamar dug into improv as a performer and writer in the Second City touring company, ETC stage and Main Stage. His comedy chops have earned him roles in Hollywood comedies such as Arrested Development, The League, Key and Peele, Modern Family, and Jimmy Kimmel Live.

Enriquez is certainly an unforgettable performer. He uses his entire body when he performs his one man— completely silent— show, “Ithamar has Nothing to Say.” Directed by Frank Caeti, this show is unlike anything that has ever been on the Finest City Stage before.

Developed into a web series produced by Maker Studios, Principato-Young Entertainment and Key and Peele, Ithamar Has Nothing To Say is a tour de force of music, physicality, comedy and heart.

When Finest City Improv asked Ithamar for a quote about the show, he had nothing to say.

Tickets to Ithamar Has Nothing to Say are $15 and are available now!

Following the hilarious night of silence, experienced improv and comedy professionals are invited to attend Ithamar’s “master class” on the afternoon of Sunday, January 17 from noon to 3 p.m. as Finest City Improv’s distinguished visiting artist.

Don’t miss your chance to learn from a master of physical comedy!
Enriquez is facilitating a workshop on Sunday, January 17th from 12pm-3pm called “Shut up and Move!”
REGISTER NOW!

Ithamar is a Second City Main Stage Alum and veteran Conservatory instructor and director at the Second City Hollywood.

We talked with current student, George Campbell, about why he is so excited for this opportunity. “Creative, supportive plays, such as lifting another player into the air for his zero-g astronaut scene, are unforgettable and just plain fun. Why be stuck in your head when you have an entire body to utilize for improv?”

Check out what ABC 7 Chicago said about Ithamar Has Nothing To Say!

Then, catch the web series based on the live show.