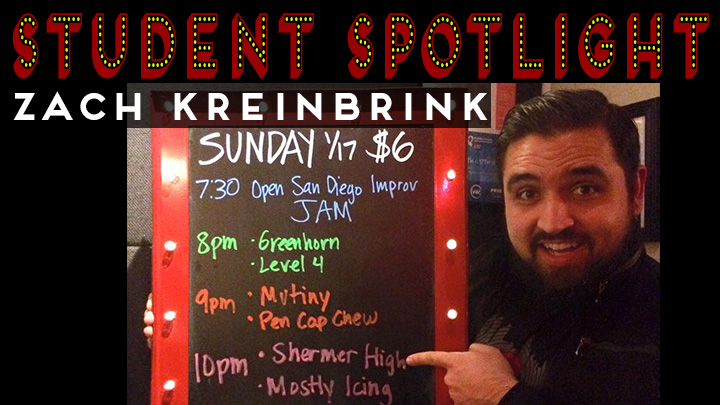 I heard about Zach right away from his level one teacher and about how dedicated, passionate, and kind he was to his fellow students and to the art of improv. Then I started seeing him at shows, coming to support and watch the talented performers at Finest City Improv. He quickly became a part of our work study program, getting to see more shows, getting to know more people. I was most impressed when he and his level 2 comrades were already starting a team (now known as Shermer High). So when thinking about a student that so fully demonstrates what we at FCI believe, it was clear we had to talk with the one and only, Zach Kreinbrink!

“I dreamed about doing improv. I finally got up enough guts to do it and I am so happy I did because now I’m addicted! “Zach, on starting improv

Zach in his own words

In a way, I owe my obsession with all things comedy to religion.

No, I didn’t have a “come to <insert deity>” moment, directing me towards the laughter or anything like that. But Dana Carvey’s Church Lady sketch from SNL, on the other hand? Pure worship. I distinctly remember being on the playground at recess, in what had to have been first grade or so, and selectively dropping “well, isn’t that special?” at opportune times during whatever conversations seven-year-old engaged in during the late 80s to early 90s in the Midwest. You might say it was my first-ever catch phrase.

The years progressed, and I would continually beg my parents to let me stay up on Saturday nights to watch the comedians who became my heroes: Carvey, Hartman, Hooks, Nealon, Myers, Farley, Sandler. I would repeat these sketches verbatim every Monday to anyone who would listen (and most who wouldn’t). Later, I discovered old reruns of SCTV and the original cast of SNL, and by that time, it was too late. “Wait – Bill Murray was on TV EVERY WEEK before Stripes and Ghostbusters?!” “Hold on – Steve Martin and Dan Aykroyd were wild and crazy BEFORE the Jerk and Blues Brothers?!” “JOHN BELUSHI WAS A SAMURAI?!?”

I rang up renews and late fees on every sketch comedy book I could find at the library. I discovered that all of my heroes honed their chops at these two weird theaters in my backyard, Second City and ImprovOlympic. I lost track of how many shows I saw at both, both sketch and improv. Oh my God, improv! Look how incredible they are! Thinking on their feet, feeding off each others’ energies. There’s no way I could ever do that.

But I dreamed about doing it. For years and years; through film school, through living and writing in LA, I manifested myself on stage with a group, making people laugh. I never had the guts to pull the trigger though; anxiety and nerves crippled me constantly. “I’m a ‘behind-the-camera’ guy,” I’d tell myself. “I’d be so out of my league,” I’d say in the mirror.

Finally, due in large part to the supportive insistence of my wife Lindsay, I pulled the trigger and signed up for my first class last summer. It only took me 32 years. That decision has been proven to easily be the second-most rewarding leap of faith (after somehow managing to convince my wife that I’m worthy of her time) I’ve ever taken. Through improv, I’ve met some of the most genuine and supportive people on the face of the planet, a few of which I formed a team with (come see Shermer High sometime!!). I’m more confident in my day-to-day routine. My reflexes are sharper and my heart, fuller. There is no “out of your league”; there’s only raw, collaborative creativity. I’m resolved that improv will always be in my life, in some respect, no matter where I am.