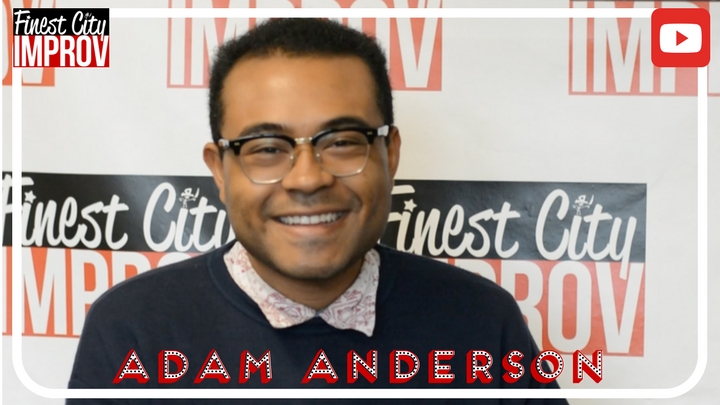 Adam Anderson is our community spotlight this month! He lets out his “wacky ideas” through improvisation and enjoys his tight knit class community– often spotted doing trivia or seeing shows together!

Adam is a filmmaker based out of San Diego, CA. In 2010, he founded the independent production company Giant Face Films, seeking to tell stories about the human condition with unique visual styles. His horror short “Lamb’s Blood” won the award for Best Original Score at the SD Student Film Awards in 2014. Currently, Adam is working to complete a series of short films, as well as continuing pre-production on his feature film, “Buy Roses for Me.”

I do a lot of film making, so I’m behind the camera a lot of the time. So it’s interesting to kind of get some insight and perspective being in front of well, I mean not really a camera all the time, but at least in front of a lot of people. I feel like I always try to be just a really supportive scene partner, and I feel like I come up with too many wacky ideas in my head for my own good. So I usually try to translate that into whatever scene I’m in, being patient and kind of just taking your time with things, and kind of building things one thing at a time, especially allowing somebody else or at least your scene partner to build it together with them.

Everybody is very supportive. Everybody’s very helpful. And everybody’s kind of just helping each other grow in a sense. It’s cool to be able to just chat with fellow students and just kind of learn all the different parts and all the different perspectives from everybody that’s also training with me.

I’d say my improv motto is probably don’t be afraid of the deep dive, which I think of it as just don’t let yourself get hesitant. Don’t judge your own ideas. Trust yourself. Love the ideas that you’re coming up with, and then just kind of go on stage and just trust that it’s all going to come naturally.